This article, which discusses preventive maintenance in BlockSim, also appears in the System Analysis Reference book.

Long-term benefits of preventive maintenance include:

When Does Preventive Maintenance Make Sense?

Preventive maintenance is a logical choice if, and only if, the following two conditions are met:

If both of these conditions are met, then preventive maintenance makes sense. Additionally, based on the costs ratios, an optimum time for such action can be easily computed for a single component. This is detailed in later sections.

The Fallacy of "Constant Failure Rate" and "Preventive Replacement"

However, consider the following cases for a single component:

Case 1: The component's reliability from 0 to 60 hours:

As can be seen, both cases — with and without preventive maintenance — yield the same results.

The following figure shows the Cost Per Unit Time vs. Time plot and it can be seen that the corrective replacement costs increase as the replacement interval increases. In other words, the less often you perform a PM action, the higher your corrective costs will be. Obviously, as we let a component operate for longer times, its failure rate increases to a point that it is more likely to fail, thus requiring more corrective actions. The opposite is true for the preventive replacement costs. The longer you wait to perform a PM, the less the costs; if you do PM too often, the costs increase. If we combine both costs, we can see that there is an optimum point that minimizes the costs. In other words, one must strike a balance between the risk (costs) associated with a failure while maximizing the time between PM actions. 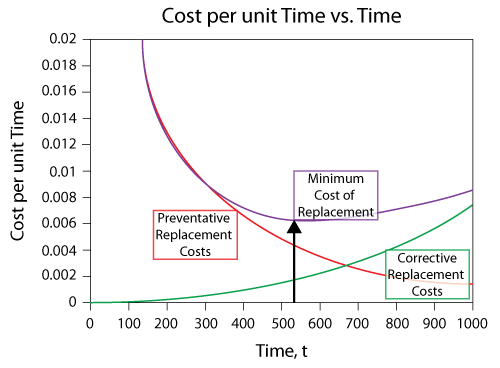 To determine the optimum time for such a preventive maintenance action (replacement), we need to mathematically formulate a model that describes the associated costs and risks. In developing the model, it is assumed that if the unit fails before time [math]t\,\![/math], a corrective action will occur and if it does not fail by time [math]t\,\![/math], a preventive action will occur. In other words, the unit is replaced upon failure or after a time of operation, [math]t\,\![/math], whichever occurs first. Thus, the optimum replacement time can be found by minimizing the cost per unit time, [math]CPUT\left( t \right).\,\![/math] [math]CPUT\left( t \right)\,\![/math] is given by:

Or by solving for a [math]t\,\![/math] that satisfies the following equation:

Interested readers can refer to Barlow and Hunter [2] for more details on this model.

In BlockSim (Version 8 and above), you can use the Optimum Replacement window to determine the optimum replacement time either for an individual block or for multiple blocks in a diagram simultaneously. When working with multiple blocks, the calculations can be for individual blocks or for one or more groups of blocks. For each item that is included in the optimization calculations, you will need to specify the cost for a planned replacement and the cost for an unplanned replacement. This is done by calculating the costs for replacement based on the item settings using equations or simulation and then, if desired, manually entering any additional costs for either type of replacement in the corresponding columns of the table.

The equations used to calculate the costs of planned and unplanned tasks for each item based on its associated URD are as follows:

When using simulation, for costs associated with planned replacements, all preventive tasks based on item age or system age (fixed or dynamic intervals) are considered. Because each item is simulated as a system (i.e., in isolation from any other item), tasks triggered in other ways are not considered.

Estimate the optimum replacement age in order to minimize these costs.

Prior to obtaining an optimum replacement interval for this component, the assumptions of the following equation must be checked.

The figure below shows the Cost vs. Time plot of the component (with the scaling adjusted and the plot annotated to show the minimum cost). 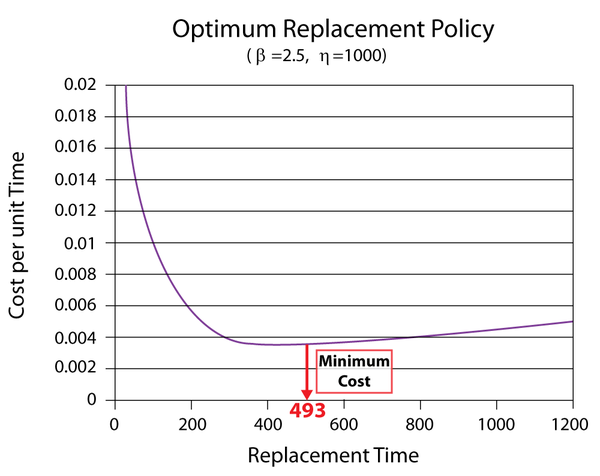 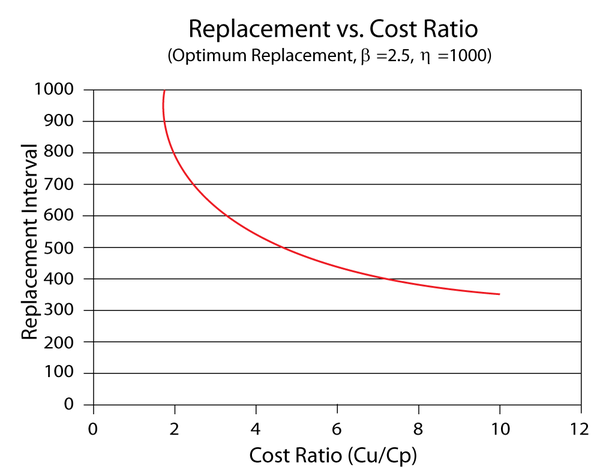