In the prior sections, we concentrated on failure and repair actions of a system. In doing so, we viewed the system from a system/component up/down perspective. One could take this analysis a step further and consider system throughput as a part of the analysis. To define system throughput, assume that each component in the system processed (or made) something while operating. As an example, consider the case shown next with two components in series, each processing/producing 10 and 20 items per unit time (ipu) respectively.

In this case, the system configuration is not only the system's reliability-wise configuration but also its production/processing sequence. In other words, the first component processes/produces 10 ipu and the second component can process/produce up to 20 ipu. However, a block can only process/produce items it receives from the blocks before it. Therefore, the second component in this case is only receiving 10 ipu from the block before it. If we assume that neither component can fail, then the maximum items processed from this configuration would be 10 ipu. If the system were to operate for 100 time units, then the throughput of this system would be 1000 items, or [math](100\cdot 10)\,\![/math].

In looking at throughput, one needs to define some terminology and metrics that will describe the behavior of the system and its components when doing such analyses. Some of the terminology used in BlockSim is given next.

Consider the system shown in the figure below.

Blocks [math]A\,\![/math] through [math]I\,\![/math] produce a number of items per unit time as identified next to each letter (e.g., [math]A\,\![/math] : 100 implies [math]100\,\![/math] items per time unit for [math]A\,\![/math] ). The connections shown in the RBD show the physical path of the items through the process (or production line). For the sake of simplicity, also assume that the blocks can never fail and that items are routed equally to each path.

This then implies that the following occurs over a single time unit:

Thus, the following table would represent the throughput and excess capacity of each block after one time unit. 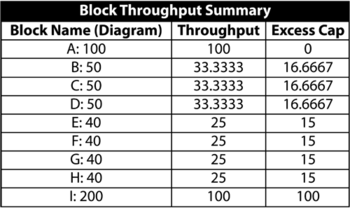 Now consider the figure below where it is assumed that block [math]E\,\![/math] has failed.

A summary result table is shown next: 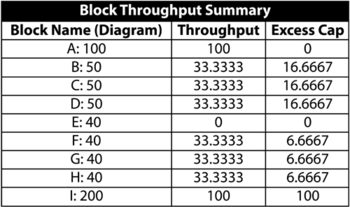 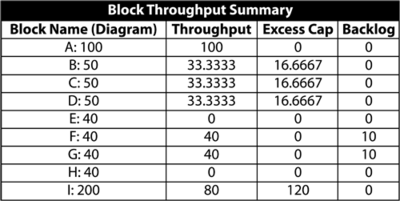 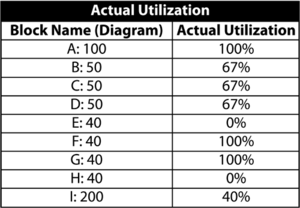 In BlockSim, specific throughput properties can be set for the blocks in the diagram.

Throughput: The number of items that the block can process per unit time.

Allocation: Specify the allocation scheme across multiple paths (i.e., equal or weighted). This option is shown in the figure below. 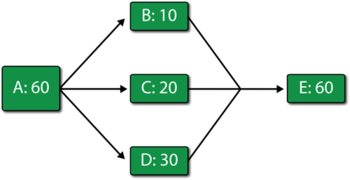 To explain these settings, consider the example shown in the above figure, which uses the same notation as before.

The results would then be as shown in the table below.

If the Allocate equal share to all paths option is chosen, then 20 units will be sent to [math]B\,\![/math], [math]C\,\![/math] and [math]D\,\![/math] regardless of their processing capacity, yielding the results shown in the table below.

In the special case in which one or more blocks fail, causing a disruption in the path, and the Send units to failed blocks option is not selected, then the blocks that have a path to the failed block(s) will not be able to process any items, given the fact that they cannot be sent to the forward block. In this case, these blocks will keep all items received in their backlog. As an example, and using the figure below, if [math]E\,\![/math] is failed (and [math]E\,\![/math] cannot accept items in its backlog while failed), then [math]B\,\![/math], [math]C\,\![/math] and [math]D\,\![/math] cannot forward any items to it. Thus, they will not process any items sent to them from [math]A\,\![/math]. Items sent from [math]A\,\![/math] will be placed in the backlogs of items [math]B\,\![/math], [math]C\,\![/math] and [math]D.\,\![/math] 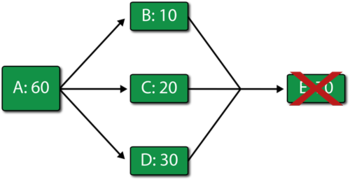 Process/Ignore backlog: Identify how a block handles backlog. A block can ignore or process backlog. Items that cannot be processed are kept in a backlog bin and are processed as needed.

Additionally, you can set the maximum number of items that can be stored in the backlog. When you choose to ignore the backlog, BlockSim will still report items that cannot be processed in the backlog column. However, it will let the backlog accumulate and never process it. In the case of a limited backlog, BlockSim will not accumulate more backlog than the maximum allowed and will discard all items sent to the block if they exceed its backlog capacity. It will keep count of the units that did not make it in the backlog in a category called Excess Backlog. To illustrate this, reconsider Scenario 3, but with both [math]F\,\![/math] and [math]G\,\![/math] having a limited backlog of 5. After a single time unit of operation, the results would be as shown in the tables below.

Scenario 3 summary with F and G having a limited blacklog and after one time unit.

Scenario 3 summary with F and G having a limited backlog and after two time units.

Note that the blocks will never be able to process the backlog in this example. However, if we were to observe the system for a longer operation time and through failures and repairs of the other blocks, there would be opportunities for the blocks to process their backlogs and catch up. It is very important to note that when simulating a system with failures and repairs in BlockSim, you must define the block as one that operates through system failure if you wish for backlog to be processed. If this option is not set, the block will not operate through system failure and thus will not be able to process any backlog items when components that cause system failure (from an RBD perspective) fail.

Simulations that contain both mirrored blocks and throughput analysis behave in the following way:

System availability: All blocks within a mirror group will be considered the same block for system uptime/downtime analysis. This means that if the block fails, it will be considered a downed block everywhere that the mirrored block is found. 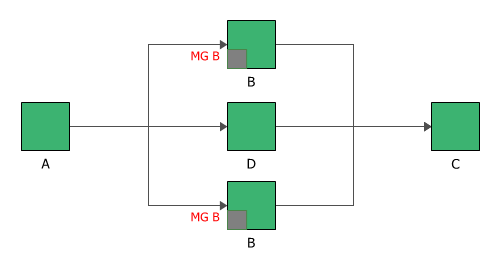 If all the blocks are operating, then the system throughput is 300 units/hour, as each instance of block B is able to handle 100 units/hour. 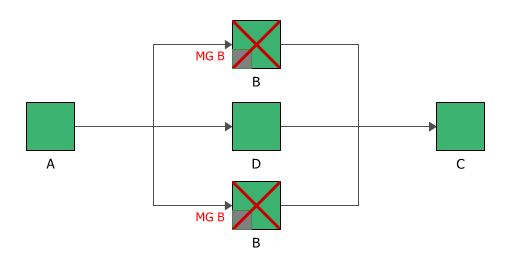 If block B is down, then the system throughput becomes 100 units/hour, as block B is considered down at both locations.

In many real-world cases throughput can change over time (i.e., throughput through a single component is not a constant but a function of time). The discussion in this chapter is devoted to cases of constant, non-variable throughput. BlockSim does model variable throughput using phase diagrams. These are discussed in Introduction to Reliability Phase Diagrams.

The prior sections illustrated the basics concepts in throughput analysis. However, they did not take into account the reliability and maintenance properties of the blocks and the system. In a complete analysis, these would also need to be incorporated. The following simple example incorporates failures and repairs. Even though the example is trivial, the concepts presented here form the basis of throughput analysis in BlockSim. The principles remain the same no matter how complex the system.

Consider the simple system shown in the figure below, but with [math]E\,\![/math] operating. 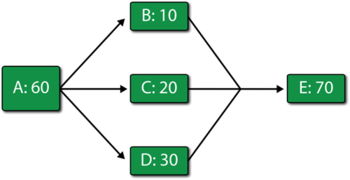 In addition, consider the following deterministic failure and repair characteristics:

Then the system behavior from 0 to 100 time units is given in the table below. The system event history is as follows:

Once the system history has been established, we can examine the throughput behavior of this system from 0 to 100 by observing the sequence of events and their subsequent effect on system throughput. 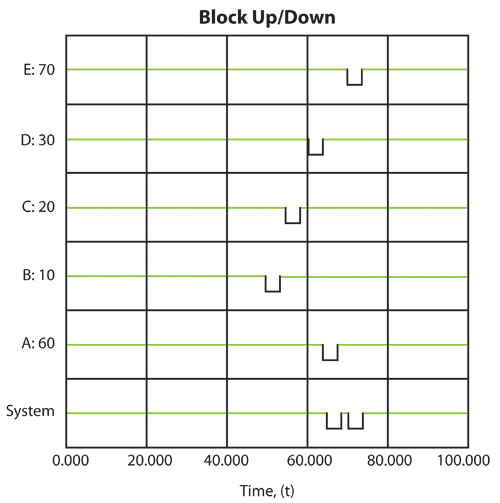 Between 65 and 69, A fails. This stops the flow of items in the system and provides an opportunity for the other blocks to process their backlogs. As an example, B processes 40 items from the 60 items in its backlog. Specifically:

It should be noted that if we had allowed items to be sent to failed blocks, B , [math]C\,\![/math] and [math]D\,\![/math] would have processed the items received and the backlog would have been at [math]E\,\![/math]. The rest of the time, all units are up.

BlockSim provides all of these results via the Simulation Results Explorer. The figure below shows the system throughput summary.

System level results present the total system throughput, which is 5484 items in this example. Additionally, the results include the uptime utilization of each component. The block level result summary, shown next, provides additional results for each item.

Finally, specific throughput results and metrics for each block are provided, as shown next.

A life cycle cost analysis involves the analysis of the costs of a system or a component over its entire life span. Typical costs for a system may include:

A complete life cycle cost (LCC) analysis may also include other costs, as well as other accounting/financial elements (such as discount rates, interest rates, depreciation, present value of money, etc.).

For the purpose of this reference, it is sufficient to say that if one has all the required cost values (inputs), then a complete LCC analysis can be performed easily in a spreadsheet, since it really involves summations of costs and perhaps some computations involving interest rates. With respect to the cost inputs for such an analysis, the costs involved are either deterministic (such as acquisition costs, disposal costs, etc.) or probabilistic (such as cost of failures, repairs, spares, downtime, etc.). Most of the probabilistic costs are directly related to the reliability and maintainability characteristics of the system.

The estimations of the associated probabilistic costs is the challenging aspect of LCC analysis. In the following example, we will look at using some of the cost inputs associated with BlockSim to obtain such costs.

Consider the manufacturing line (or system) shown next. 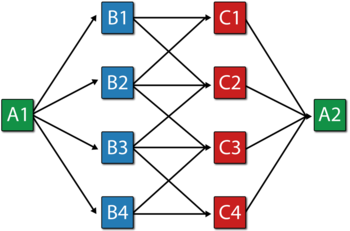 The block properties, pool properties and crew properties are given in the following tables. All blocks identified with the same letter have the same properties (i.e., Blocks A = A1 and A2; Blocks B = B1, B2, B3 and B4; and Blocks C = C1, C2, C3 and C4).

This system was analyzed in BlockSim for a period of operation of 8,760 hours, or one year. 10,000 simulations were performed. The system overview is shown next.

Most of the variable costs of interest were obtained directly from BlockSim. The next figure shows the overall system costs.

From the summary, the total cost is $92,197.64. Note that an additional cost was defined in the problem statement that is not included in the summary. This cost, the operating cost per item per hour of operation, can be obtained by looking at the uptime of each block and then multiplying this by the cost per hour, as shown in the following table. Therefore, the total cost is [math]92,197+313,813=\$406,010.\,\![/math]