In this appendix, we attempt to provide a brief elementary introduction to the most common and fundamental statistical equations and definitions used in reliability engineering and life data analysis. The equations and concepts presented in this appendix are used extensively throughout this reference.

The Probability Density Function and the Cumulative Distribution Function

From probability and statistics, given a continuous random variable [math]X,\,\![/math] we denote:

The pdf and cdf give a complete description of the probability distribution of a random variable. The following figure illustrates a pdf. 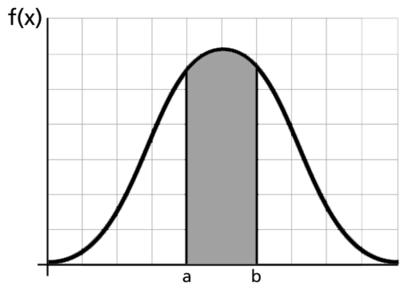 The next figures illustrate the pdf - cdf relationship. 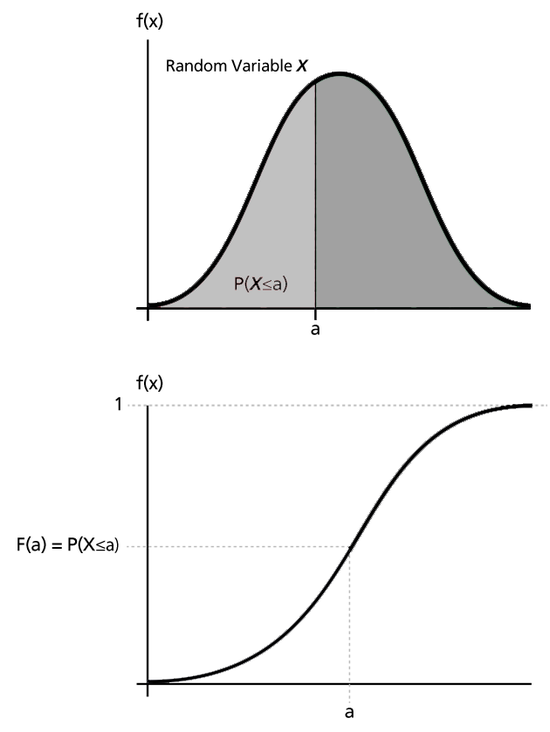 That is, the probability that [math]X\,\![/math] takes on a value in the interval [math][a,b]\,\![/math] is the area under the density function from [math]a\,\![/math] to [math]b,\,\![/math] as shown above. The pdf represents the relative frequency of failure times as a function of time.

That is, for a number [math]x\,\![/math], [math]F(x)\,\![/math] is the probability that the observed value of [math]X\,\![/math] will be at most [math]x\,\![/math]. The cdf represents the cumulative values of the pdf. That is, the value of a point on the curve of the cdf represents the area under the curve to the left of that point on the pdf. In reliability, the cdf is used to measure the probability that the item in question will fail before the associated time value, [math]t\,\![/math], and is also called unreliability.

Note that depending on the density function, denoted by [math]f(x)\,\![/math], the limits will vary based on the region over which the distribution is defined. For example, for the life distributions considered in this reference, with the exception of the normal distribution, this range would be [math][0,+\infty ].\,\![/math]

The mathematical relationship between the pdf and cdf is given by:

where [math]s\,\![/math] is a dummy integration variable. 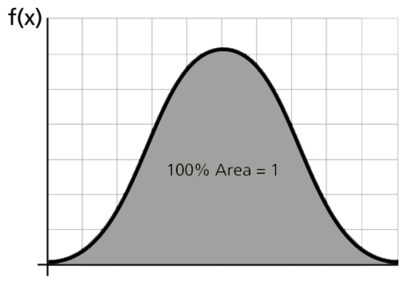 Another is the lognormal distribution, whose pdf is given by:

Or, one could equate this event to the probability of a unit failing by time [math]t\,\![/math]. 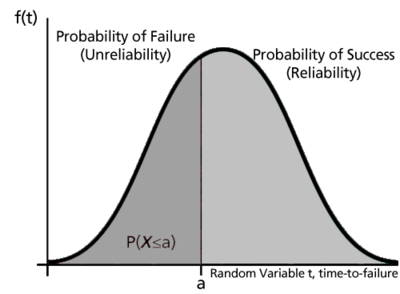 Reliability and unreliability are the only two events being considered and they are mutually exclusive; hence, the sum of these probabilities is equal to unity.

The failure rate function enables the determination of the number of failures occurring per unit time. Omitting the derivation, the failure rate is mathematically given as:

This gives the instantaneous failure rate, also known as the hazard function. It is useful in characterizing the failure behavior of a component, determining maintenance crew allocation, planning for spares provisioning, etc. Failure rate is denoted as failures per unit time.

The mean life function, which provides a measure of the average time of operation to failure, is given by:

This is the expected or average time-to-failure and is denoted as the MTTF (Mean Time To Failure).

The MTTF, even though an index of reliability performance, does not give any information on the failure distribution of the component in question when dealing with most lifetime distributions. Because vastly different distributions can have identical means, it is unwise to use the MTTF as the sole measure of the reliability of a component.

Median life, [math]\tilde{T}\,\![/math], is the value of the random variable that has exactly one-half of the area under the pdf to its left and one-half to its right. It represents the centroid of the distribution. The median is obtained by solving the following equation for [math]\breve{T}\,\![/math]. (For individual data, the median is the midpoint value.)

For a continuous distribution, the mode is that value of [math]t\,\![/math] that corresponds to the maximum probability density (the value at which the pdf has its maximum value, or the peak of the curve).

A statistical distribution is fully described by its pdf. In the previous sections, we used the definition of the pdf to show how all other functions most commonly used in reliability engineering and life data analysis can be derived. The reliability function, failure rate function, mean time function, and median life function can be determined directly from the pdf definition, or [math]f(t)\,\![/math]. Different distributions exist, such as the normal (Gaussian), exponential, Weibull, etc., and each has a predefined form of [math]f(t)\,\![/math] that can be found in many references. In fact, there are certain references that are devoted exclusively to different types of statistical distributions. These distributions were formulated by statisticians, mathematicians and engineers to mathematically model or represent certain behavior. For example, the Weibull distribution was formulated by Waloddi Weibull and thus it bears his name. Some distributions tend to better represent life data and are most commonly called "lifetime distributions".

A more detailed introduction to this topic is presented in Life Distributions.