It is often desirable to be able to compare two sets of reliability or life data in order to determine which of the data sets has a more favorable life distribution. The data sets could be from two alternate designs, manufacturers, lots, assembly lines, etc. Many methods are available in statistical literature for doing this when the units come from a complete sample (i.e., a sample with no censoring). This process becomes a little more difficult when dealing with data sets that have censoring, or when trying to compare two data sets that have different distributions. In general, the problem boils down to that of being able to determine any statistically significant difference between the two samples of potentially censored data from two possibly different populations. This section discusses some of the methods available in Weibull++ that are applicable to censored data.

One popular graphical method for making this determination involves plotting the data with confidence bounds and seeing whether the bounds overlap or separate at the point of interest. This can be easily done using the Overlay Plot feature in Weibull++. This approach can be effective for comparisons at a given point in time or a given reliability level, but it is difficult to assess the overall behavior of the two distributions because the confidence bounds may overlap at some points and be far apart at others.

The data sets are entered into separate Weibull++ standard folio data sheets, and then analyzed with the two-parameter Weibull distribution and the maximum likelihood estimation (MLE) method. The following figure shows the contour plots of the data sets superimposed in an overlay plot. This plot is configured to show the contour lines that represent the 90% and 95% confidence levels. 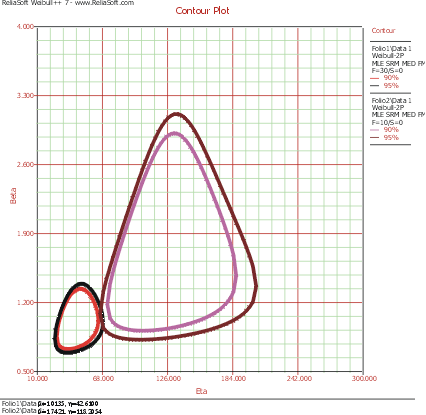 Weibull++ includes a utility for automatically obtaining the critical confidence level. For two contour plots that are superimposed in an overlay plot, the Plot Critical Level check box will be available in the Contours Setup window, as shown next. 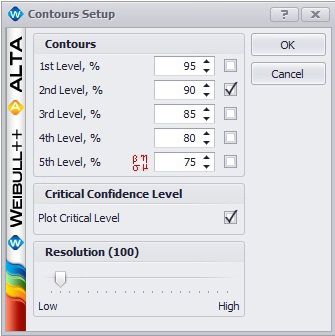 Note that due to the calculation resolution and plot precision, the contour lines at the calculated critical level may appear to overlap or have a gap.

Sometimes we may need to compare the life when one of the distributions is truncated. For example, if the random variable from the first distribution is truncated with a range of [L, U}, then the comparison with the truncated distribution should be used. For details, please see Stress-Strength Analysis.

Consider two product designs where X and Y represent the life test data from two different populations. If we simply wanted to determine which component has a higher reliability, we would simply compare the reliability estimates of both components at a time [math]t\,\![/math]. But if we wanted to determine which product will have a longer life, we would want to calculate the probability that the distribution of one product is better than the other. Using the equation given above, the probability that X is greater than or equal to Y can be interpreted as follows:

First, enter the data sets into two separate Weibull++ standard folios (or two separate data sheets within the same folio) and analyze the data sets using the two-parameter Weibull distribution and maximum likelihood estimation (MLE) method. Next, open the Life Comparison tool and select to compare the two data sets. The next figure shows the pdf curves and the result of the comparison.

The comparison summary is given in the Results Panel window. 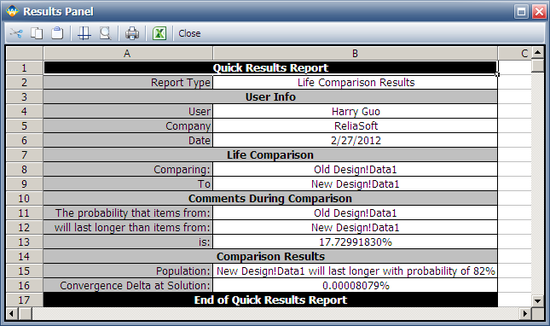