Given that products are more frequently being designed with higher reliability and developed in a shorter amount of time, it is often not possible to test new designs to failure under normal operating conditions. In some cases, it is possible to infer the reliability behavior of unfailed test samples with only the accumulated test time information and assumptions about the distribution. However, this generally leads to a great deal of uncertainty in the results. Another option in this situation is the use of degradation analysis. Degradation analysis involves the measurement of performance data that can be directly related to the presumed failure of the product in question. Many failure mechanisms can be directly linked to the degradation of part of the product, and degradation analysis allows the analyst to extrapolate to an assumed failure time based on the measurements of degradation over time.

With this failure level defined, it is a relatively simple matter to use basic mathematical models to extrapolate the measurements over time to the point where the failure is said to occur. Once these have been determined, it is merely a matter of analyzing the extrapolated failure times in the same manner as conventional time-to-failure data. 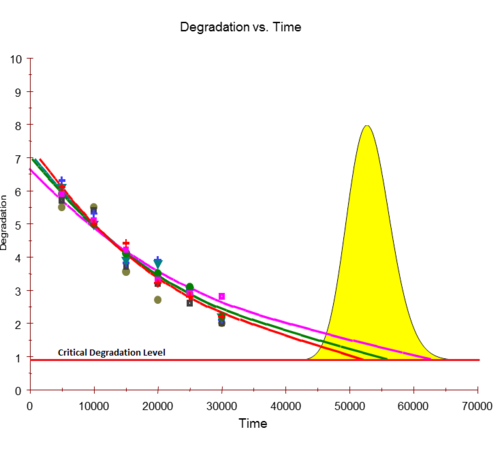 Once the degradation information has been recorded, the next task is to extrapolate the measurements to the defined failure level in order to estimate the failure time. Weibull++ allows the user to perform such extrapolation using a linear, exponential, power or logarithmic model. These models have the following forms:

Five turbine blades are tested for crack propagation. The test units are cyclically stressed and inspected every 100,000 cycles for crack length. Failure is defined as a crack of length 30mm or greater. The following table shows the test results for the five units at each cycle:

Use the exponential degradation model to extrapolate the times-to-failure data.

Substituting the values into the underlying exponential model, solve for [math]x\,\![/math] or:

These times-to-failure can now be analyzed using traditional life data analysis to obtain metrics such as the probability of failure, B10 life, mean life, etc. This analysis can be automatically performed in the Weibull++ degradation analysis folio.

The variance of the predicted failure time will be:

The variance and covariance of the model parameters are calculated from using Least Squares Estimation. The details of the calculation are not given here.

The 2-sided upper and lower bounds for the predicted failure time, with a confidence level of [math]1-\alpha \,\![/math] are:

In Weibull++, the default confidence level is 90%.

Using the same data set from the previous example, predict the interval failure times for the turbine blades.

In the Weibull++ degradation analysis folio, select the Use extrapolated intervals check box, as shown next. 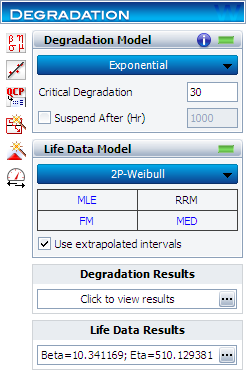 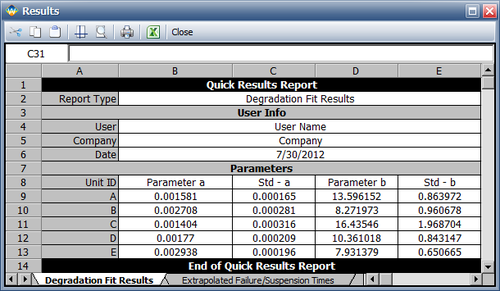 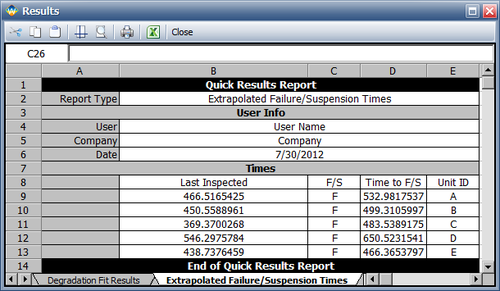 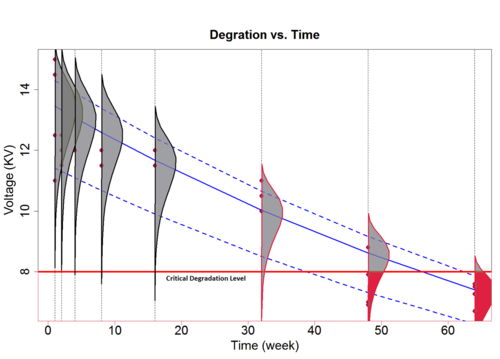 The first step of destructive degradation analysis involves using a statistical distribution to represent the variability of a degradation measurement at a given time. The following distributions can be used:

Similar to accelerated life testing analysis, the assumption is that the location or log-location parameter of the degradation measurement distribution will change with time while the shape parameter will remain constant. For each distribution:

Finally, given the selected distribution, a degradation model is used to represent the change of the location (or log-location) parameter with time. The following degradation models can be used:

The CDF of the degradation measurement [math]x(t)\,\![/math] is:

Assuming that the requirement is that the measurement needs to be greater than a critical degradation value [math]{{D}_{crit}}\,\![/math] for the product to fail, the probability of failure at time [math]t\,\![/math] will be: 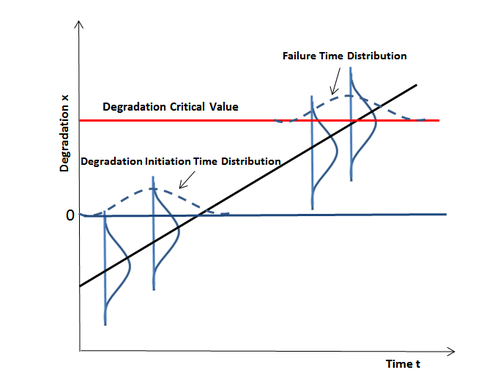 A company has been collecting degradation data over a period of 4 years with the purpose of calculating reliability after 5 years. With the degradation measurement decreasing with time, failure is defined as a measurement of 150 or below. In order to obtain such measurements, the unit has to be destroyed and therefore removed from the population.

The following table gives the degradation measurements over 4 years.

Enter the data into a destructive degradation folio in Weibull++. Select Linear under the Degradation Model and 2P-Weibull under the Measurement Distribution. Set the critical degradation to 150. Click Calculate. 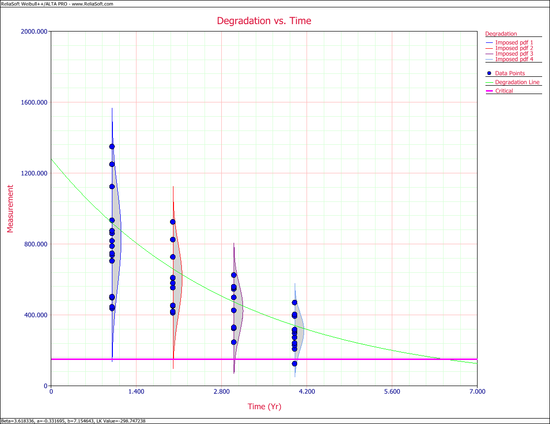 3. Using the QCP, the reliability at 5 years, or in other words the probability that the degradation measurement will be less than 150 at 5 years, is: 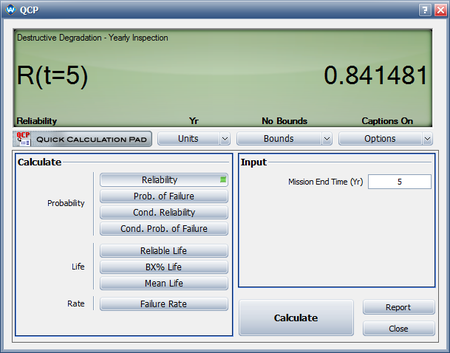