This example appears in the Reliability Growth and Repairable System Analysis Reference.

Determine the following: Construct a reliability growth plan using the RGA software and make sure that the goal MTBF can be met within the total test hours allocated for growth testing. If not, make necessary changes in the phase durations in order to meet the goal. 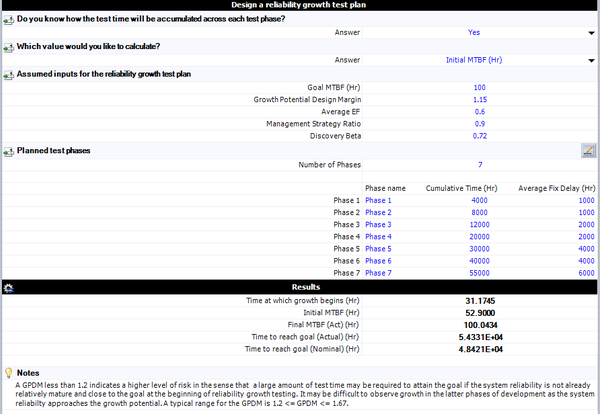 Also, the next figure shows that the nominal time to meet the MTBF goal is 48,420 hours, which is higher than the total test time that is currently planned to be allocated for reliability growth.

A new plan needs to be considered. The reliability team decides to increase the test time for phases 5 and 6 to be 10,000 hours each, instead of the 5,000 hours that were considered in the initial plan. Also, the team decides to increase the duration of the 7th phase to 15,000 hours. Since this is going to be achieved by testing for more calendar time in phases 5, 6 and 7, the average fix delay during those phases is the same as the one in the initial plan. The test time per week is not going to be affected, only more weeks will be added to the schedule. The next figure shows the revised plan, together with the calculated results. The actual time to meet the MTBF goal is now 54,331 hours. The final MTBF that can be achieved at the end of the 55,000 hours of growth testing is 100.04, which is slightly higher than the goal MTBF of 100 hours. The reliability team considers this plan as acceptable, since the MTBF goal will be met. 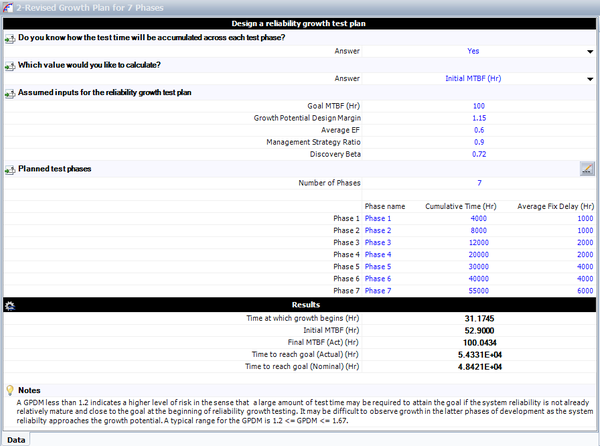 The next plot shows the overall reliability growth plan, with the nominal and actual growth curves, the MTBF goal line and the planned MTBF for each of the seven phases. 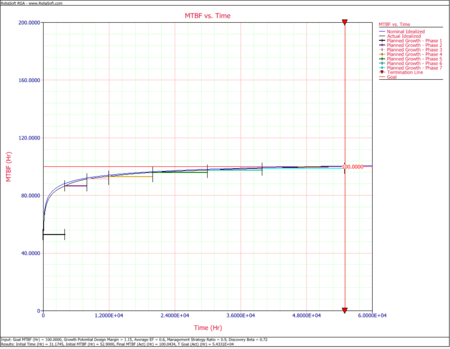