Statistical models rely extensively on data to make predictions. In life data analysis, the models are the statistical distributions and the data are the life data or times-to-failure data of our product. The accuracy of any prediction is directly proportional to the quality, accuracy and completeness of the supplied data. Good data, along with the appropriate model choice, usually results in good predictions. Bad or insufficient data will almost always result in bad predictions.

In the analysis of life data, we want to use all available data sets, which sometimes are incomplete or include uncertainty as to when a failure occurred. Life data can therefore be separated into two types: complete data (all information is available) or censored data (some of the information is missing). Each type is explained next.

Complete data means that the value of each sample unit is observed or known. For example, if we had to compute the average test score for a sample of ten students, complete data would consist of the known score for each student. Likewise in the case of life data analysis, our data set (if complete) would be composed of the times-to-failure of all units in our sample. For example, if we tested five units and they all failed (and their times-to-failure were recorded), we would then have complete information as to the time of each failure in the sample. 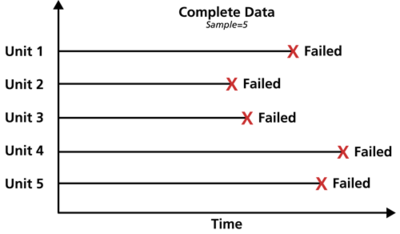 In many cases, all of the units in the sample may not have failed (i.e., the event of interest was not observed) or the exact times-to-failure of all the units are not known. This type of data is commonly called censored data. There are three types of possible censoring schemes, right censored (also called suspended data), interval censored and left censored.

The most common case of censoring is what is referred to as right censored data, or suspended data. In the case of life data, these data sets are composed of units that did not fail. For example, if we tested five units and only three had failed by the end of the test, we would have right censored data (or suspension data) for the two units that did not failed. The term right censored implies that the event of interest (i.e., the time-to-failure) is to the right of our data point. In other words, if the units were to keep on operating, the failure would occur at some time after our data point (or to the right on the time scale). 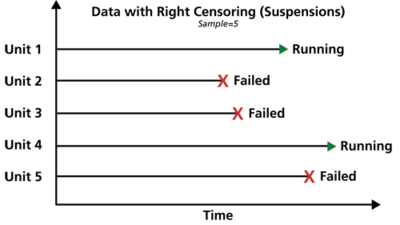 The second type of censoring is commonly called interval censored data. Interval censored data reflects uncertainty as to the exact times the units failed within an interval. This type of data frequently comes from tests or situations where the objects of interest are not constantly monitored. For example, if we are running a test on five units and inspecting them every 100 hours, we only know that a unit failed or did not fail between inspections. Specifically, if we inspect a certain unit at 100 hours and find it operating, and then perform another inspection at 200 hours to find that the unit is no longer operating, then the only information we have is that the unit failed at some point in the interval between 100 and 200 hours. This type of censored data is also called inspection data by some authors. 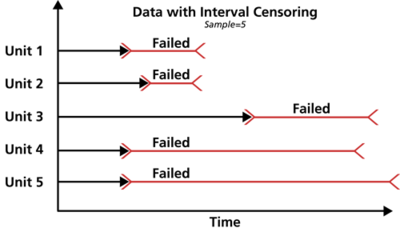 It is generally recommended to avoid interval censored data because they are less informative compared to complete data. However, there are cases when interval data are unavoidable due to the nature of the product, the test and the test equipment. In those cases, caution must be taken to set the inspection intervals to be short enough to observe the spread of the failures. For example, if the inspection interval is too long, all the units in the test may fail within that interval, and thus no failure distribution could be obtained. 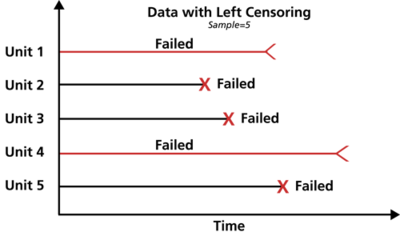 In the standard folio, data can be entered individually or in groups. Grouped data analysis is used for tests in which groups of units possess the same time-to-failure or in which groups of units were suspended at the same time. We highly recommend entering redundant data in groups. Grouped data speeds data entry by the user and significantly speeds up the calculations.

A Note about Complete and Suspension Data

Depending on the event that we want to measure, data type classification (i.e., complete or suspension) can be open to interpretation. For example, under certain circumstances, and depending on the question one wishes to answer, a specimen that has failed might be classified as a suspension for analysis purposes. To illustrate this, consider the following times-to-failure data for a product that can fail due to modes A, B and C: 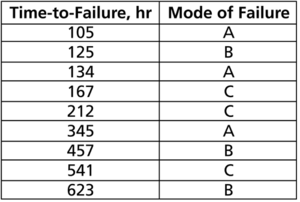 After the completion of a reliability test or after failures are observed in the field, a redesign can be implemented to improve a product’s reliability. After the redesign, and before new failure data become available, it is often times desirable to “adjust” the reliability that was calculated from the previous design and take “credit” for this theoretical improvement. This can be achieved with fractional failures. Using past experience to estimate the effectiveness of a corrective action or redesign, an analysis can take credit for this improvement by adjusting the failure count. Therefore, if a corrective action on a failure mode is believed to be 70% effective, then the failure count can be reduced from 1 to 0.3 to reflect the effectiveness of the corrective action.

In this case, a design change has been implemented for the failure mode that occurred at 168 hours and is assumed to be 60% effective. In the background, Weibull++ converts this data set to:

If Rank Regression is used to estimate distribution parameters, the median ranks for the previous data set are calculated as follows:

Given this information, the standard Rank Regression procedure is then followed to estimate parameters.

If Maximum Likelihood Estimation (MLE) is used to estimate distribution parameters, the grouped data likelihood function is used with the number in group being a non-integer value.

A component underwent a reliability test. 12 samples were run to failure. The following figure shows the failures and the analysis in a Weibull++ standard folio. 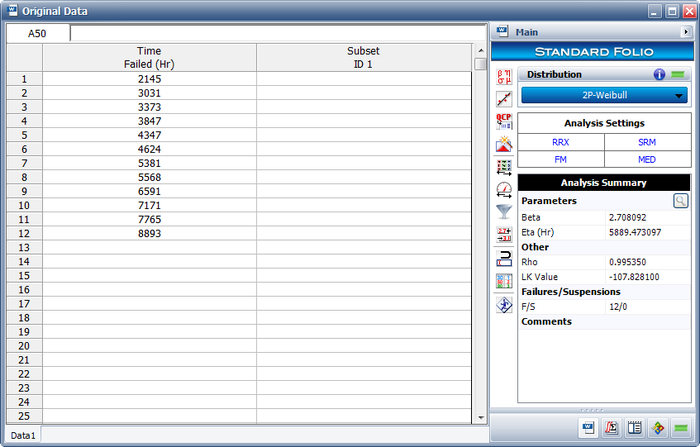 The analysts believe that the planned design improvements will yield 50% effectiveness. To estimate the reliability of the product based on the assumptions about the repair effectiveness, they enter the data in groups, counting a 0.5 failure for each group. The following figure shows the adjusted data set and the calculated parameters. 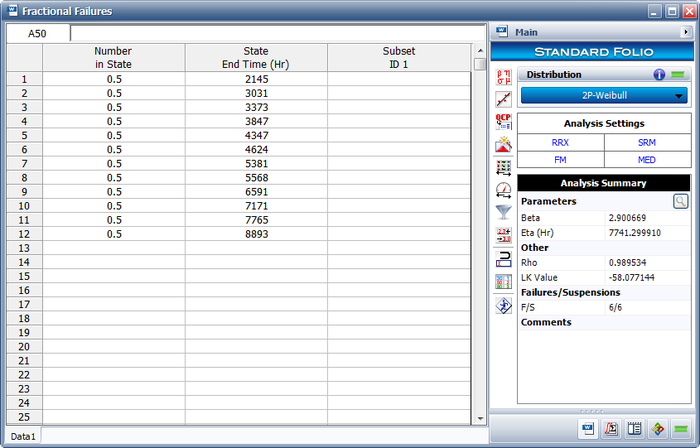 The following overlay plot of unreliability vs. time shows that by using fractional failures the estimated unreliability of the component has decreased, while the B10 life has increased from 2,566 hours to 3,564 hours.