Note that the paper clips used in this example are Jumbo paper clips that are capable of repeated bending. Different paper clips will yield different results. Additionally, and so that no other stresses are imposed, take caution to assure that the rate at which the paper clips are cycled remains the same across the experiment.

a. With one hand, hold the clip by the longer, outer loop.

b. With the thumb and forefinger of the other hand, grasp the smaller, inner loop.

c. Pull the smaller, inner loop out and down 90º so that a right angle is formed as shown.

a. With one hand, continue to hold the clip by the longer, outer loop.

b. With the thumb and forefinger of the other hand, grasp the smaller, inner loop.

c. Push the smaller inner loop up and in 90º so that the smaller loop is returned to the original upright position in line with the larger, outer loop as shown.

This completes one cycle.

3) Repeat steps 1 and 2 until the paper clip breaks. Count and record the cycles-to-failure for each clip.

Enter the data in an ALTA standard folio, and analyze the results assuming a lognormal life distribution (fatigue) and an inverse power law relationship (non-thermal) for the life-stress model. The following figures show the analysis and some of the results. 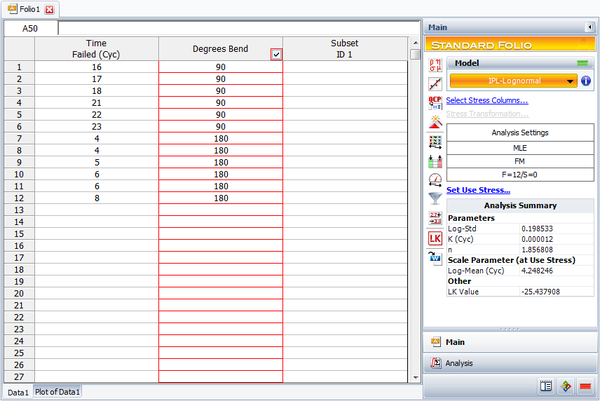 The next two figures show the analysis of the base data in Weibull++ and the base MTTF estimate. In this case, our accelerated test correctly predicted the MTTF as verified by our base test.