When conducting distribution analysis (and life data analysis), the events that are observed are assumed to be statistically independent and identically distributed (IID). A sequence or collection of random variables is IID if:

In life data analysis, the unit/component placed on test is assumed to be as-good-as-new. However, this is not the case when dealing with repairable systems that have more than one life. They are able to have multiple lives as they fail, are repaired and then put back into service. The age just after the repair is basically the same as it was just before the failure. This is called as-bad-as-old. For reliability growth and repairable systems analysis, the events that are observed are part of a stochastic process. A stochastic process is defined as a sequence of inter-dependent random events. Therefore, the events are dependent and are not identically distributed.

There is a dependency between the failures that occur on a repairable system. Events that occur first will affect future failures. Given this dependency, applying a Weibull distribution, for example, is not valid since life data analysis assumes that the events are IID. Reliability growth and repairable systems analysis provide methodologies for analyzing data/events that are associated with systems that are part of a stochastic process.

What is Reliability Growth?

In general, the first prototypes produced during the development of a new complex system will contain design, manufacturing and/or engineering deficiencies. Because of these deficiencies, the initial reliability of the prototypes may be below the system's reliability goal or requirement. In order to identify and correct these deficiencies, the prototypes are often subjected to a rigorous testing program. During testing, problem areas are identified and appropriate corrective actions (or redesigns) are taken. Reliability growth is defined as the positive improvement in a reliability metric (or parameter) of a product (component, subsystem or system) over a period of time due to changes in the product's design and/or the manufacturing process. A reliability growth program is a well-structured process of finding reliability problems by testing, incorporating corrective actions and monitoring the increase of the product's reliability throughout the test phases. The term "growth" is used since it is assumed that the reliability of the product will increase over time as design changes and fixes are implemented. However, in practice, no growth or negative growth may occur.

Screening addresses the reliability of an individual unit and not the inherent reliability of the design. If the population of devices is heterogeneous then the high failure rate items are naturally screened out through operational use or testing. Such screening can improve the mixture of a heterogeneous population, generating an apparent growth phenomenon when in fact the devices themselves are not improving. This is not considered reliability growth. Screening is a form of rework. Reliability growth is concerned with permanent corrective actions focused on prevention of problems.

Learning by operator and maintenance personnel also plays an important role in the improvement scenario. Through continued use of the equipment, operator and maintenance personnel become more familiar with it. This is called natural learning. Natural learning is a continuous process that improves reliability as fewer mistakes are made in operation and maintenance, since the equipment is being used more effectively. The learning rate will be increasing in early stages and then level off when familiarity is achieved. Natural learning can generate lessons learned and may be accompanied by revisions of technical manuals or even specialized training for improved operation and maintenance. Reliability improvement due to written and institutionalized formal procedures and manuals that are a permanent implementation to the system design is part of the reliability growth process. Natural learning is an individual characteristic and is not reliability growth.

It is typical in the development of a new technology or complex system to have reliability goals. Each goal will generally be associated with a failure definition. The attainment of the various reliability goals usually involves implementing a reliability program and performing reliability tasks. These tasks will vary from program to program. A reference of common reliability tasks is MIL-STD-785B. It is widely used and readily available. The following table presents the tasks included in MIL-STD 785B.

The Program Surveillance and Control tasks (101-105) and Design and Evaluation tasks (201-209) can be combined into a group called basic reliability tasks. These are basic tasks in the sense that many of these tasks are included in a comprehensive reliability program. Of the MIL-STD-785B Development & Production Testing tasks (301-304) only the RDGT reliability growth testing task is specifically directed toward finding and correcting reliability deficiencies.

In summary, the initial MTBF is the value actually achieved by the basic reliability tasks. The growth potential is the MTBF that can be attained if the test is conducted long enough with the current management strategy. See the figure below. 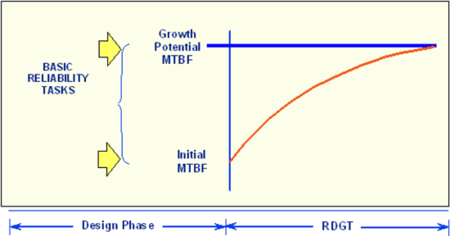 Elements of a Reliability Growth Program

Corrective action implementation raises the following question: "What if some of the fixes cannot be incorporated during testing?" It is possible that only some fixes can be incorporated into the product during testing. However, others may be delayed until the end of the test since it may be too expensive to stop and then restart the test, or the equipment may be too complex for performing a complete teardown. Implementing delayed fixes usually results in a distinct jump in the reliability of the system at the end of the test phase. For corrective actions implemented during testing, the additional follow-on testing provides feedback on how effective the corrective actions are and provides opportunity to uncover additional problems that can be corrected.

Note that when testing and assessing against a product's specifications, the test environment must be consistent with the specified environmental conditions under which the product specifications are defined. In addition, when testing subsystems it is important to realize that interaction failure modes may not be generated until the subsystems are integrated into the total system.

Why Are Reliability Growth Models Needed?

In addition, demonstrated reliability and projections assessments aid in:

Some basic terms that relate to reliability growth and repairable systems analysis are presented below. Additional information on terminology in RGA can be found in the RGA Glossary.

Under minimal repair, the system intensity function is:

In RGA, metrics such as MTBF and failure intensity can be calculated as instantaneous or cumulative. Cumulative MTBF is the average time-between-failure from the beginning of the test (i.e., t = 0) up to time t. The instantaneous MTBF is the average time-between-failure in a given interval, dt. Consider a grouped data set, where 4 failures are found in the interval 0-100 hours and 2 failures are found in the second interval 100-180 hours. The cumulative MTBF at 180 hours of test time is equal to 180/6 = 30 hours. However, the instantaneous MTBF is equal to 80/2 = 40 hours. Another analogy for this relates to the miles per gallon (mpg) that your car gets. In many cars, there are readouts that indicates the current mpg as you are driving. This is the instantaneous value. The average mpg on the current tank of gas is the cumulative value.

Now the concern is, how do you know whether you should estimate the instantaneous or cumulative value of a metric (e.g., MTBF or failure intensity)? In general, system requirements are usually represented as instantaneous values. After all, you want to know where the system is now in terms of its MTBF. The cumulative MTBF can be used to observe trends in the data.

It is determined a priori whether a test is time terminated or failure terminated. The test data does not determine this.