This example appears in the System Analysis Reference book.

Consider a car with four new tires and a full-size spare. Assume the following failure characteristics:

Assume a mission of 1,000 miles. If a tire fails during this trip, it will be replaced with the spare. However, the spare will not be repaired during the trip. In other words, the trip will continue with the spare on the car and, if the spare fails, the system will fail. Determine the probability of system failure.

The active failure distribution for the tires are:

The block diagram for each tire has two blocks in series, one block representing the wearout mode and the other the random puncture mode, as shown next:

There are five tires, four active and one standby (represented in the diagram by a standby container with a 4-out-of-5 requirement), as shown next: 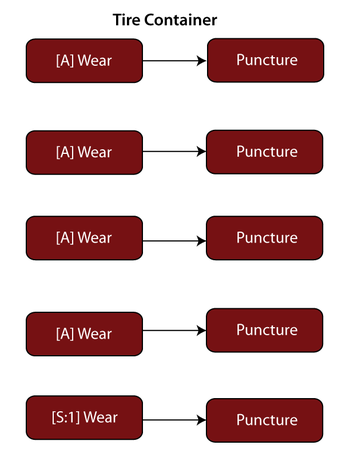 For the standby Wear block, set the active failure and the quiescent distributions, but for the Puncture block, set only the active puncture distribution (because the tire cannot fail due to puncture while stored). Using BlockSim, the probability of system failure is found to be 0.003 or 0.3%.