Reliability growth analysis can be conducted using different data types. This chapter explores and examines the possible data schemes, and outlines the available models for each data type. The data types for developmental testing (traditional reliability growth analysis) will be discussed first. Then we will discuss the data types that support the use of RGA models for analyzing fielded systems (either for repairable systems analysis or fleet data analysis).

Time-to-failure (continuous) data is the most commonly observed type of reliability growth data. It involves recording the times-to-failure for the unit(s) under test. Time-to-failure data can be applied to a single unit or system or to multiple units or systems. There are multiple data entry schemes for this data type and each is presented next. This data type is used for tests where the exact failure times are unknown and only the number of failures within a time interval are recorded (e.g., inspection data). For a single system, multiple failures can occur before the operator stops the test. In this case, X number of failures are found after Y hours of test time. Failures [math]X_{1}\,\![/math], [math]X_{2}\,\![/math], [math]X_{3}\,\![/math], etc. could have occurred at any time period up to the termination time, thus exact times for each failure are not available. This is commonly called interval or grouped data. Grouped data can be helpful to merge data from multiple locations. 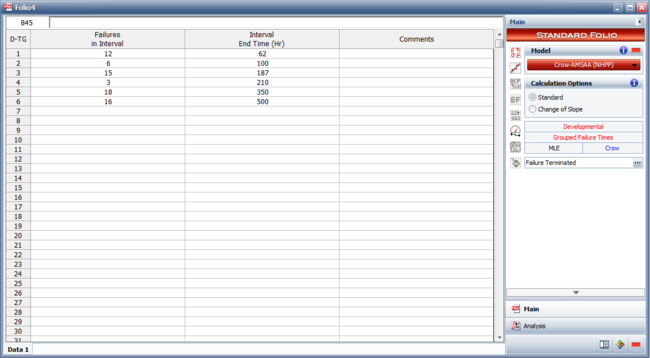 This data type is used for tests where a number of systems are tested, and if a failure occurs in any system, a corrective action is taken on the failed unit and any design changes are incorporated into all test systems. Once the corrective actions have been implemented, the test is resumed. In this data type, the systems can accumulate usage at different rates. In addition, the systems do not have to start the test at the same time. The basic idea of Multiple Systems (Known Operating Times) is that when one system fails, the usage on the other systems on test must also be known. This is a flexible data type, but it is also the most demanding given the information required on all systems. The time-to-failure for the failed system, along with the current operating times of all other systems, is recorded. The data can be cumulative or non-cumulative. Consider the following data sheet where the Failed Unit ID column indicates which unit failed. For example, if you enter 2 into the "Failed Unit ID" column, this indicates that the unit in the Time Unit 2 column is the one that has failed. For the units that did not fail, you must enter the operating time at the time of the other unit's failure. 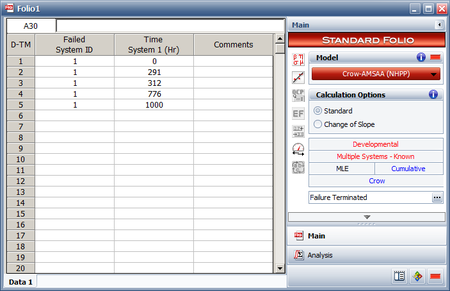 In this example, two units are undergoing testing and the units do not accumulate age at the same rate. At 10 hours into the test, unit 1 fails and corrective action is taken on both units 1 and 2. By this time, both units have accumulated 10 hours of operation. At 17 hours, unit 2 fails, and corrective action is again implemented on both units; however, unit 1 has accumulated 5 hours of operating time and unit 2 has accumulated 7 hours since the last event. The rest of the data can be interpreted in a similar manner.

This data type is used for tests where a number of systems are tested. The start time, failure time(s) and end time for each system are recorded. This data type assumes uniform time accumulation and that the systems are tested simultaneously. When a corrective action is implemented on a failed system, the fix is also applied to the non-failed systems. This results in all systems on test having the same configuration throughout the test. As an example, consider the data of two systems shown in the following figure. In this case, the folio is shown in Normal view.

System 1 begins testing at time equals 0 (with a start event, S). Note that when entering data within the Normal view, each system must be initiated with a start event. The failures encountered by System1 are corrected at 281, 312 and 776 (with failure events, F). Testing stops at 1000 hours (with an end event, E). System 2 begins testing at time equals 0 and failures are encountered and corrected at 40, 222 and 436. Testing stops at 500 hours. The next figure shows the folio and the same data set in the Advanced Systems view.

This data type is similar to Multiple Systems (Concurrent Operating Times) except that a date is now associated with each failure time, as well as for the start and end time of each system. This assumes noncontinuous usage, and the software computes equivalent (average) usage rates. To determine when dates are important and whether or not they should be included in your analysis, consider the picture below (not drawn to scale). The next figure shows an example of Multiple Systems with Dates in RGA.

Even though event codes are added to the data entry, the underlying assumptions associated with the Crow Extended model have not changed. Additional information on Multiple Systems with Event Codes is presented on the Crow Extended page. The next figure shows an example of this type of data.

The following models can be used to analyze time-to-failure (continuous) data sets. Models and examples using the different data types are discussed in later chapters.

Discrete data are also referred to as success/failure or attribute data. These data sets consist of data from a test where a unit is tested with only two possible outcomes: success or failure. An example of this is a missile that gets fired once and it either succeeds or fails. The data types available for analyzing discrete data with the RGA software are:

For sequential data, an item is tested with only two possible outcomes: success or failure. This could be a one-shot item such as a missile or an entire system that either succeeds or fails. The item is then inspected after each trial and redesigned/repaired before the next trial. The following figure shows an example of this data type, where the row number in the data sheet represents the sequence of the trials. In this data set, trial #1 succeeded, trial #2 failed, and so on.

Often after failure analysis you know the reason for failure during a particular trial. If this is the case, the reason for each failure can also be used in the analysis. This data entry is identical to the sequential data with the exception that a failure code, mode or ID is added after each failure so that the analysis can take into account different failure modes. The next figure shows an example of this type of data.

The Mixed data type is basically a combination of Grouped per Configuration and Sequential data. It allows for testing to be conducted in groups of configurations, individual trial by trial or a combination of individual trials and configurations where more than one trial is tested. The following figure shows an example of this data type. For example the first row of this data sheet shows that 3 failures occurred in the first 4 trials, the second row shows that there were no failures in the next trial, while the third row shows that 3 failures occurred in the next 4 trials.

The following models can be used to analyze discrete data. Models and examples using the different data types are discussed in later chapters.

Reliability data can be analyzed across multiple phases. This is useful when an overall reliability growth program is planned and involves multiple test phases.

This data type can be used for tests that span multiple phases and the exact failure times are recorded. The figure below shows an example of multi-phase failure times data, where the different events signify failures (F), test phases (PH) or analysis points (AP). 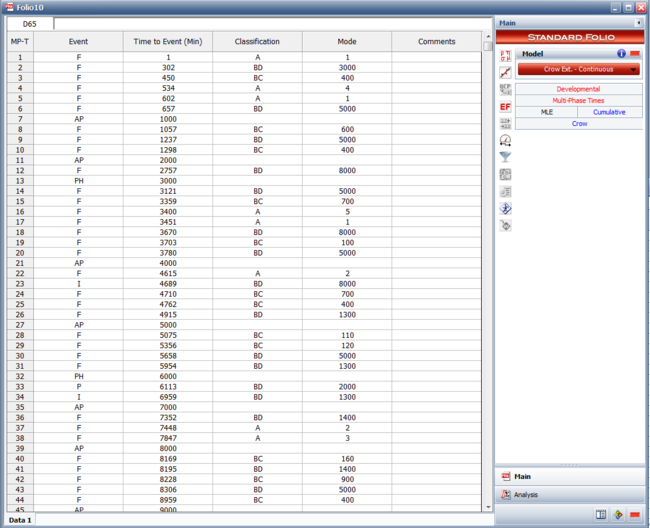 This data type can be used for tests that span multiple phases and the exact failure times are unknown. Only the number of failures within a time interval are recorded, as shown in the figure below. 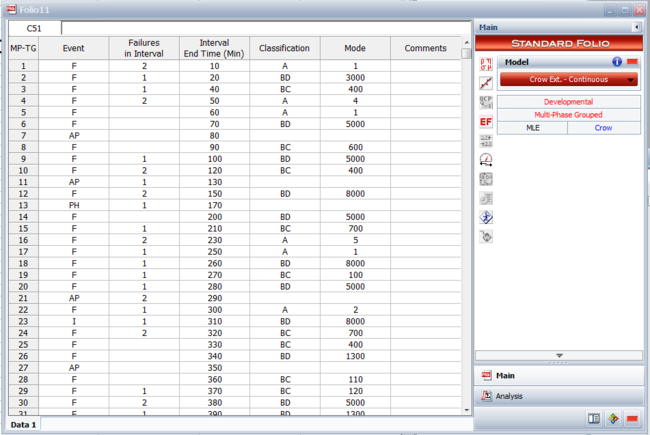 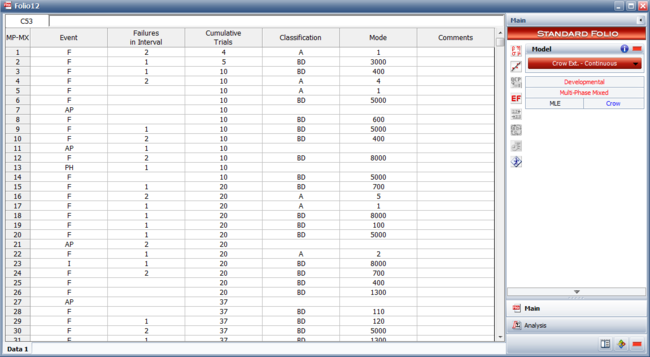 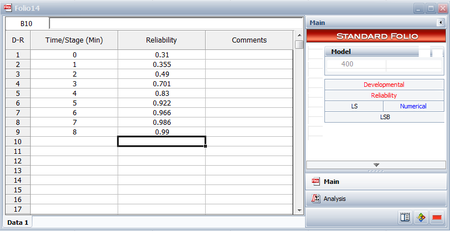 The following models can be used to analyze reliability data sets. Models and examples using different data types are discussed in later chapters.

Fielded systems are systems that are used by customers in the field and for which failure information is not derived from an in-house test. This type of data is analogous to warranty data. The data types available for fielded systems data entry are:

Repairable Systems data is identical in format to the Multiple Systems (Concurrent Operating Times) data. It also can be entered in the Normal or Advanced Systems view. The following figure illustrates a sample data set. In repairable systems, the purpose of the analysis is not to evaluate reliability growth but rather to obtain reliability estimates for the system, including expected number of failures, reliability at a given time, and so forth. 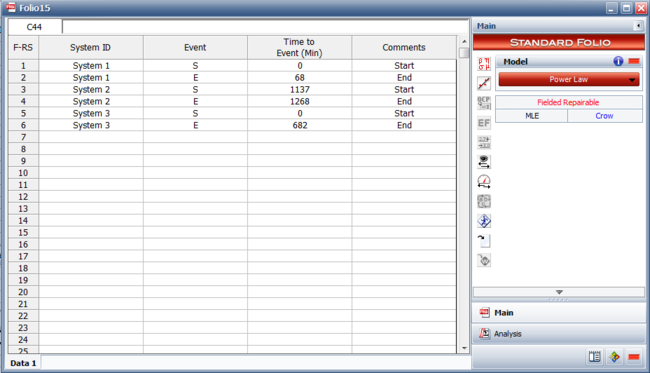 This data type is used to analyze the entire population (fleet). The data entry for this data type is similar to the data entry for repairable systems; however, the overall data analysis is again different. In repairable systems, the reliability of a single system can be tracked and quantified, whereas in a fleet analysis, data from the entire fleet as a whole is analyzed. The figure below presents an example of data entered for fleet analysis. 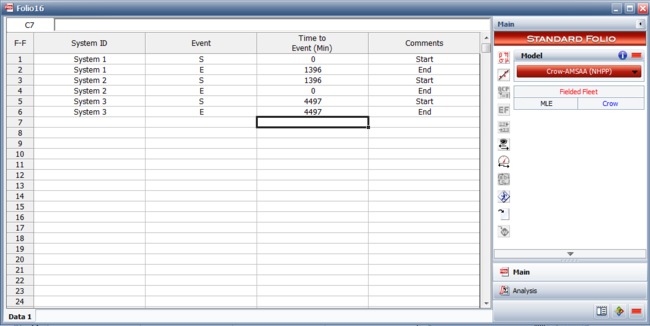 The following models can be used to analyze fleet data. Models and examples using different data types are discussed in later chapters.