A Standby gate behaves just like a standby container in BlockSim's RBDs. Standby containers were discussed in Time-Dependent System Reliability (Analytical) and RBDs and Analytical System Reliability. Events leading into a Standby gate have active and quiescent failure distributions, just like contained blocks. Furthermore, the gate acts as the switch, can fail and can also define the number of active blocks whose failure would cause system failure (i.e., the Active Vote Number required ). In BlockSim, no additional gates are allowed below a Standby gate.

Determine the reliability of the system for 500 hours. 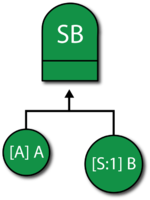